Massage THIS Point for a Calming Effect 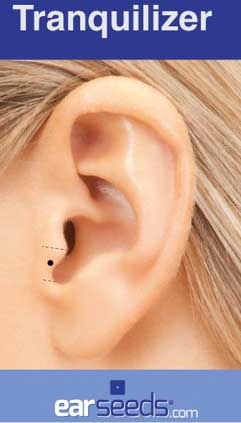 Feeling anxious or restless? Would you like to avoid turning to medication with its long list of potential side effects? Auriculotherapy can help. Stimulating the Tranquilizer Point on the ear can produce a feeling of sedation and calm.

In the 1950s, a French neurologist, Dr. Paul Nogier, came to realize that when stimulated, points on the auricle, or outer ear, sent impulses to the brain and tapped into the body’s natural healing response. Different points correspond to certain body systems. So applying pressure to one area of the ear could bring about positive change in say the endocrine system, for example. He became known as the “father of auriculotherapy,” which is the practice of stimulating these ear points to alleviate various ailments and conditions. This is similar to reflexology except solely concentrated on the ear.

What’s so Great About the Tranquilizer Point?

The Tranquilizer Point can be found on the tragus. It’s halfway between the tip of tragus and the intertragic notch, or the U-shaped area where the tragus meets the cheek. This point is also nicknamed the “Valium Point” because of its calming, relaxing and anti-anxiety effects. Additionally, it’s sometimes referred to as the “Hypertensive Point” because it may help reduce high blood pressure associated with chronic stress. It can be stimulated in conjunction with other points to combat issues like stress, anxiety and depression.


How to Stimulate the Tranquilizer Point

Using moderate pressure (firm but not too hard), massage the Tranquilizer Point between your thumb and index finger for at least 30 seconds. Repeat this every few hours. Ear seeds are another excellent auriculotherapy tool and exert continuous mild pressure on the point for maximum results. At earseeds.com we have a host of kits that include vaccaria seeds, pellets and beads attached to long-lasting adhesive tape, including condition-specific kits like our Anxiety Ear Seed Kit. Simply stick them to the specified points and press on them every few hours. These ear seed kits contain everything you need to learn proper ear seed placement.