Dry mouth is a frequent side effect of medications. According to the FDA and the Surgeon General, there are at least 400 medications that cause this condition. It is also one of the main reasons patients do not take their medications as prescribed. As a result, these patients are not being treated for serious, life-threatening conditions — conditions that would otherwise be treated effectively with medications they cannot take due to dry mouth. 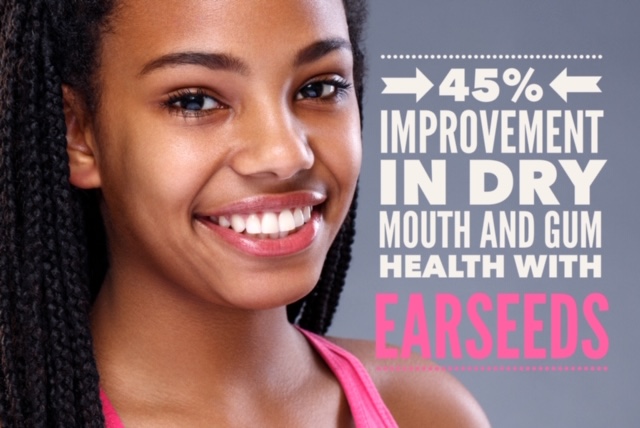 Aside from patients not taking their medications as prescribed, there are other serious complications associated with dry mouth. One such complication is receding gums. According to the Centers for Disease Control, dry mouth can lead to receding gums. The presence of both conditions has serious implications for oral health. Inflammation and lack of saliva associated with these conditions are a major cause of tooth decay and gingivitis, which in turn increase the risk of developing serious medical conditions such as diabetes and oral cancer. Just as importantly, dry mouth and receding gums greatly reduce the quality of life for patients experiencing them.

Many patients assume that receding gums is a normal part of aging, when, in fact, it is not. Unfortunately, there are few, if any, conventional treatments for these conditions. Out of sheer desperation, many patients suffering from receding gums are willing to try anything, including home remedies, lozenges, artificial saliva, or switching or stopping medication. In the absence of effective treatments, it is worthwhile to consider alternative, holistic modalities.

Unlike other forms of auriculotherapy that entail the use of needles or puncturing, auriculotherapy with ear seeds entails the placement of metallic (24K gold ear seeds or high-quality stainless steel) or herbal vaccaria seeds on the external part of the ears. In line with the positive clinical results obtained in Europe, we have received overwhelmingly positive feedback from students and graduates of our EarSeeds Certification Training Program. One of the most remarkable testimonials we have received comes from Sonda Kilson, an EarSeeds certified practitioner. One of her clients, let’s call her Mary, had been suffering from dry mouth and receding gums for many years.

Desperate for some relief and all out of conventional options, Mary began receiving auriculotherapy with ear seeds. Assuming this treatment would fail like all the others, she was shocked to wake up the next morning with a mouth full of saliva. From that point forward, she did not experience another bout of dry mouth. Just as shocked as Mary were her dentist, dental hygienist, and other healthcare professionals who had struggled unsuccessfully to provide her with some measure of relief. Upon closer examination, her team of dental professionals documented a 45% improvement in her gums and a significant improvement in overall oral health. What’s more, the longer she wore ear seeds and the more pressure she applied to them, the healthier her gums and overall oral health became.

The feedback regarding Mary is similar to the feedback we have received from other therapists & practitioners who utilized ear seeds. Dry mouth and receding gums increase the risk of disease while diminishing overall quality of life. Based on clinical results and the overwhelmingly positive feedback we have received, we strongly recommend incorporating ear seeds in the treatment of dry mouth and receding gums.

Here is the actual screenshot of this amazing success. 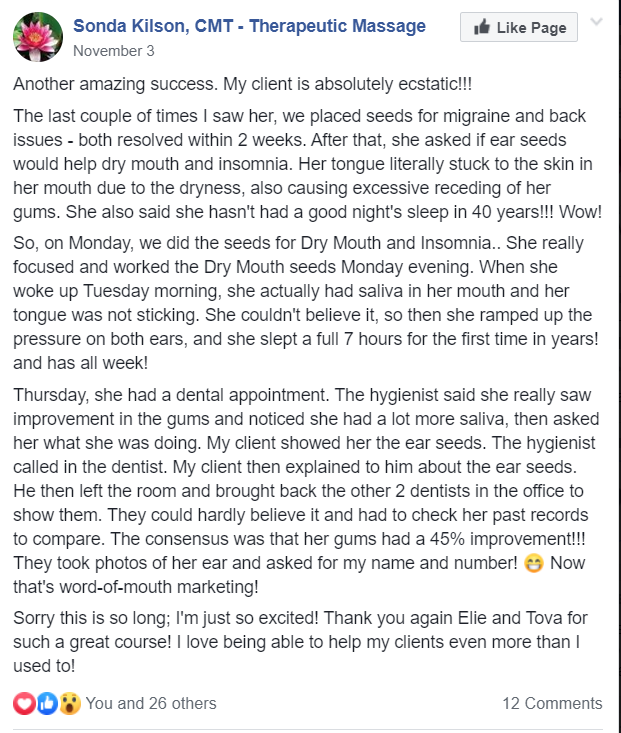